Cows are anything but sexy, so thinking of them as a good photography model or subject would probably be considered a bit odd.  I must say, my opinion of cows is probably less romantic than the average person.  After spending six years of my youth working on a large scale dairy farm, I’ve lost nearly all interest in spending my free time around these big and smelly animals.  I have no illusion of how “cute” baby calves are and how much “fun” it would be to feed and take care of them.  Spoiler alert: when you have over one hundred calves to feed twice daily, seven days a week, the “fun” runs out in a hurry!

Despite my current lack of interest in bovine, cows are not difficult to spot on the great plains and a lot of areas in the American West.  After all, much of the landscape has been modified by man in order to raise cattle.  Indeed, they are an important food resource and without them the world would be a less tasty place!  Can you imagine the world without ribeye steak or a good beef roast with mashed potatoes and gravy?!?

This weekend I went for a drive down the Bad River Road outside Pierre, South Dakota.  After driving around for an hour or so, I was confronted with a beautifully colored sunset but the majority of the landscape was still nothing but short, brown, and wholly uninspiring grass, I turned my attention to these large four legged residents of  the expansive ranch land and said to a herd of cows, “You will be my models tonight!”  Well, cows are not sexy, but it turns out they can still look good in a picture! 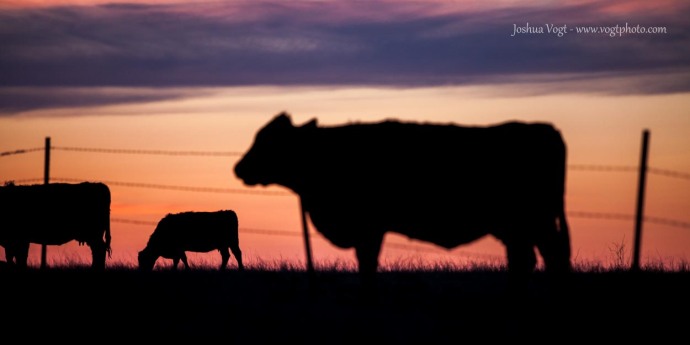 Icy Evening Along the Missouri River

While driving in to Pierre, South Dakota in early February to visit my folks, I couldn’t help but notice the ice build up on the Pierre side of the Missouri River.  I thought, “Hey, that ice might make an interesting foreground subject!”  So, on a brisk Saturday evening, I took  stroll down by the river with my camera.  I had to carefully negotiate the rock lined river banks to get close to the ice, and being careful not to get out onto the ice (I had no idea how thick it was) was able to get a few enjoyable images. 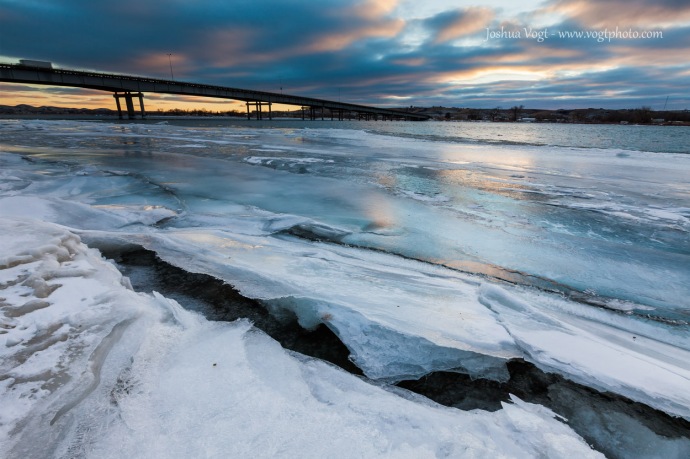 The Oahe Dam is just a few miles upriver from Pierre.  Because the flows from the dam vary day to day, so does the level of the river downstream.  Because of this fluctuation, ice sheets along the Missouri shore can crack apart and fall back into the river.

Wind and water currents pile up ice blocks along the banks of the Missouri below the 100+ year old train bridge that is still used by trains on a daily basis. 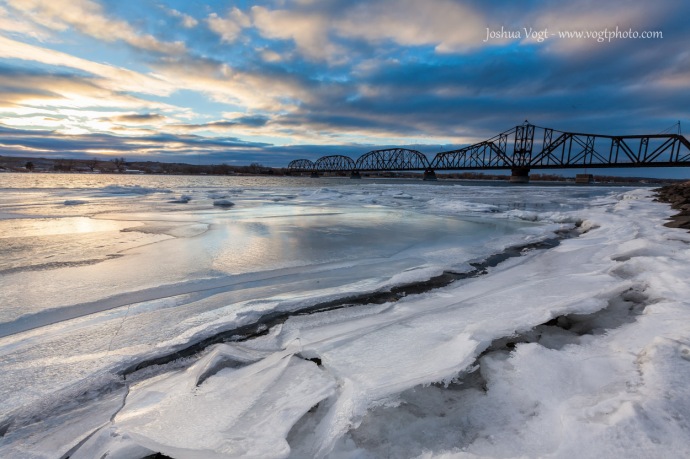 A historic flood hit this area a few years ago, with currents so strong, the sandbars and deep channels of the river were rearranged.  This stretch of river used to be much deeper, but after the flood is very shallow, which probably promotes the ice formation along this section of shoreline.

A Prairie Morning – Along the Bad River Road, South Dakota

Over Football’s Super Bowl weekend, I visited my parents in my hometown of Pierre, South Dakota.  On that bitterly cold Sunday morning, I took a drive down the Bad River Road outside Fort Pierre to see what I could see.  What I saw was a disappointing lack of snow in the area.  I’ve been down the Bad River Road in the fall when the prairie has gone dormant and turned brown, so I was really hoping to get some prairie shots with snow!

Even though I was bummed at the lack of snow, I quickly took notice of the hundreds of deer that were calling this area home for the winter.  I rarely seek out wildlife photos, but with literally hundreds of deer running about, I turned my mood around and kept my camera at the ready.

I thought the deer in the above shot was thinking, “Whatcha looking at?”  I was able to only get off a few hand held shots from my truck before he turned tail and ran off, taking his friends with him.  Can you spot this buck’s friends?

I saw this lonely, isolated tree close to the road when it was still really dark out.  As the morning twilight gave the sky interesting color, I still didn’t have a composition I was excited about, so I drove like a mad man back to this tree and took its picture.   The few trees that do live out on the prairie do not have a lot of company and this one is definitely living “The Lonely Life.”

Once twilight waned and the sun began to rise, I headed to a small creek bottom that I thought would make interesting leading lines in an image.  I took a few shots of the image I originally had in mind, but was feeling uninspired.  But once the sun broke the horizon, it lit up the long grass near the creek, and with the frost beginning to melt off the grass, made it appear to glow.  I crouched down really close to the ground and positioned my camera just a few inches away from an area of grass that was untrammeled and blasted off this image;  it turned out to be my favorite image of the trip.

One of my New Year’s resolutions is to learn Photoshop.   I’ve been serious about photography for over five years now, so I’d say I’m long overdue to take the plunge and join the “dark side” of photo editing.  I avoided learning Photoshop for so long because I was honestly too lazy to learn new software and I was put off by the cost.  I also avoided using Photoshop because of the sometimes negative stigma associated with photography and “photoshopping.”  The fact of the matter is every professional photographer, and most serious hobbyists for that matter, digitally re-touch their images.  Photoshop is simply the best (and most expensive) editing program out there.  Truth be told, I have been re-touching my images for several years now using Adobe Lightroom and plugins like Nik Efex.  With these programs, and now with Photoshop, my goal is not to create unrealistic images, but to further improve the images I do take and to help overcome the limitations of my camera gear.

To demonstrate the limitations of even my high end camera system, have a look at this series of pictures of the Capitol Building in Pierre, SD.  Below, in the first image there are two major issues that stand out to me: First, by focusing on the rock at the bottom of the frame, the Capitol and grounds are blurry because my camera can’t keep both the close up rock and far away capitol building in sharp focus.  In fact, even with a wide angle lens, the focus zone is so small that the rock sticking out of the water on the right middle of the frame is already out of focus.  Second, by exposing for how much light the rock needed to be properly lit, the capitol and grounds are overexposed and in the case of the capitol building, so overexposed there is no detail in that area, just pure white.  After all, cameras are just machines and can only record so much of a range of light, much less than the range we see with our eyes, and I have exceeded that range with my camera in the image below. 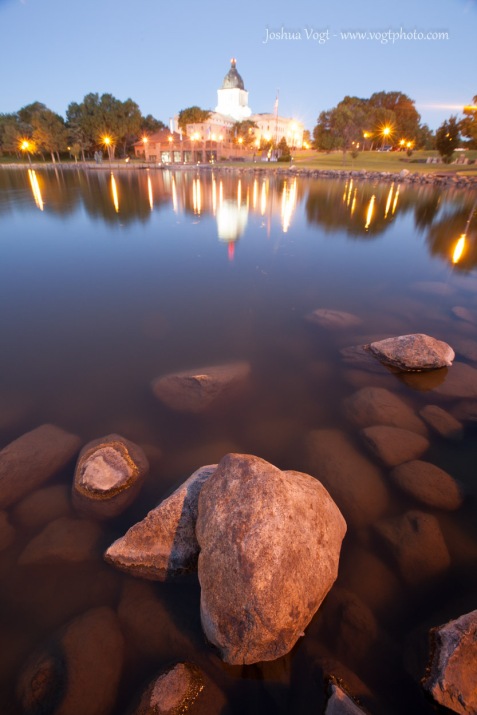 In the next image, I focused on the capitol building and also set the camera’s exposure so the capitol dome would be properly exposed.  I now have the same problem as in the first image but in reverse:  Now the rock in the foreground is blurry and also very much underexposed. 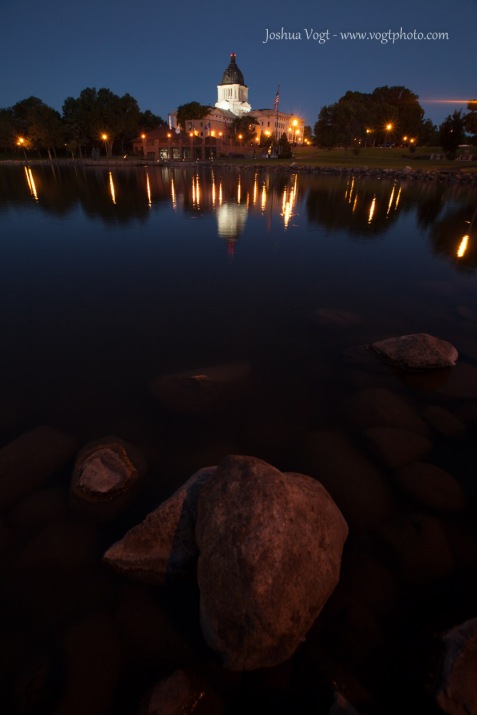 The above example shows a relatively extreme case of my exposure woes.  In practice, I always carry a variety of filters that I place in front of my camera to help control the dynamic range of a scene.  Sometimes, as in this case, using filters is not ideal or is still be insufficient to control the dynamic range of a scene.  Even though I prefer using filters in the field to correct exposure, obtaining “front to back” sharpness in an image is a chronic challenge.  With Photoshop, I will now overcome!

I don’t believe that by learning Photoshop my landscape images will become fake and from my imagination alone.  Instead, I look forward to using it to correct the limitations of my camera and gear and ultimately present an image that is more pleasing to view and is still true to the scene I actually photographed.

The final stop on my road trip moving from south Florida to Wyoming was in my childhood home of Pierre, South Dakota.  Although the main purpose of the trip was to visit family, but I did manage to slip out before sunrise one morning and photographed the capitol building.

Sadly, the sunrise wasn’t anything to get excited about, but I still took a few images I thought were worth sharing…enjoy! 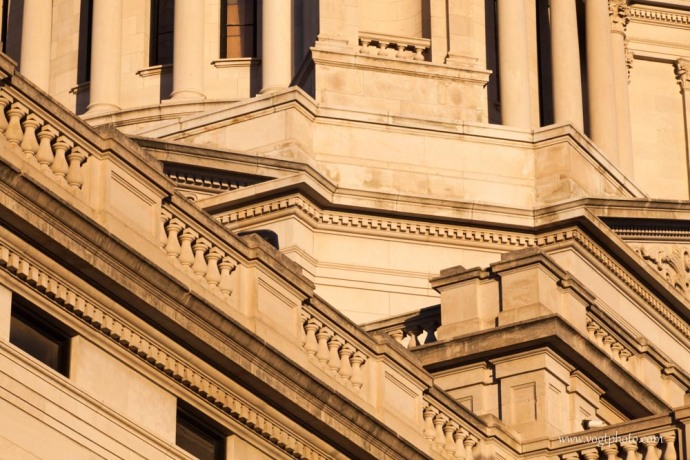