Icy Evening Along the Missouri River

While driving in to Pierre, South Dakota in early February to visit my folks, I couldn’t help but notice the ice build up on the Pierre side of the Missouri River.  I thought, “Hey, that ice might make an interesting foreground subject!”  So, on a brisk Saturday evening, I took  stroll down by the river with my camera.  I had to carefully negotiate the rock lined river banks to get close to the ice, and being careful not to get out onto the ice (I had no idea how thick it was) was able to get a few enjoyable images.

The Oahe Dam is just a few miles upriver from Pierre.  Because the flows from the dam vary day to day, so does the level of the river downstream.  Because of this fluctuation, ice sheets along the Missouri shore can crack apart and fall back into the river.

Wind and water currents pile up ice blocks along the banks of the Missouri below the 100+ year old train bridge that is still used by trains on a daily basis.

A historic flood hit this area a few years ago, with currents so strong, the sandbars and deep channels of the river were rearranged.  This stretch of river used to be much deeper, but after the flood is very shallow, which probably promotes the ice formation along this section of shoreline.

A Prairie Morning – Along the Bad River Road, South Dakota

Over Football’s Super Bowl weekend, I visited my parents in my hometown of Pierre, South Dakota.  On that bitterly cold Sunday morning, I took a drive down the Bad River Road outside Fort Pierre to see what I could see.  What I saw was a disappointing lack of snow in the area.  I’ve been down the Bad River Road in the fall when the prairie has gone dormant and turned brown, so I was really hoping to get some prairie shots with snow!

Even though I was bummed at the lack of snow, I quickly took notice of the hundreds of deer that were calling this area home for the winter.  I rarely seek out wildlife photos, but with literally hundreds of deer running about, I turned my mood around and kept my camera at the ready.

I thought the deer in the above shot was thinking, “Whatcha looking at?”  I was able to only get off a few hand held shots from my truck before he turned tail and ran off, taking his friends with him.  Can you spot this buck’s friends?

I saw this lonely, isolated tree close to the road when it was still really dark out.  As the morning twilight gave the sky interesting color, I still didn’t have a composition I was excited about, so I drove like a mad man back to this tree and took its picture.   The few trees that do live out on the prairie do not have a lot of company and this one is definitely living “The Lonely Life.”

Once twilight waned and the sun began to rise, I headed to a small creek bottom that I thought would make interesting leading lines in an image.  I took a few shots of the image I originally had in mind, but was feeling uninspired.  But once the sun broke the horizon, it lit up the long grass near the creek, and with the frost beginning to melt off the grass, made it appear to glow.  I crouched down really close to the ground and positioned my camera just a few inches away from an area of grass that was untrammeled and blasted off this image;  it turned out to be my favorite image of the trip.

Top of the Rock – Manhattan Light

To prepare for the shoot, I went on Rockefeller Center’s website and couldn’t find anything regarding restrictions, so I think “Sweet!  I’m bringing my tripod!”  Unfortunately, once purchasing the tickets in the lobby that night, in huge bold letters on the ticket, it said “No Tripods Allowed.”  I’m thinking, “How can I get a sharp image in such low light without my tripod!?!”  I decided to nonchalantly carry my tripod up to the observation deck (I had been carrying it around Manhattan all day), and if the opportunity presented itself, I’d thumb my nose at authority in pursuit of a sharp image.  I stayed away from the crowded areas of the observation deck and it turns out, the security guards turned a blind eye to me and my tripod! 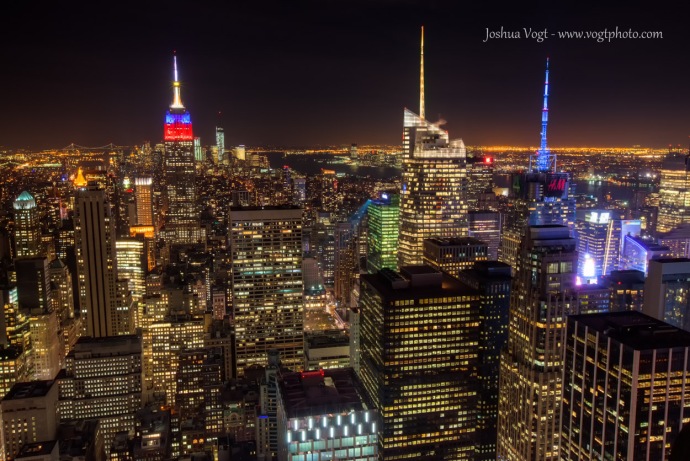 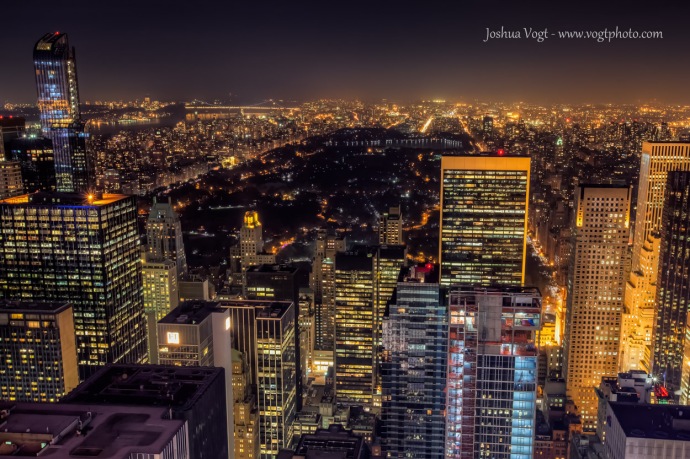 Looking North from Rock Center, Central Park stands out as a dark patch in the landscape of lights that merge with the horizon.

It was a brief trip to New York, but I thoroughly enjoyed my stay in America’s largest city.  I can’t wait to visit again!