Having little experience outside of mountain backcountry travel, I knew getting into the Everglades backcountry would be putting me out of my element.  However, I love all things nature and was bound and determined to see an area of the Everglades that is off the beaten path.

Not owning a kayak and not wanting to rent one, I was stuck with finding a hiking trail into the Everglades backcountry.  Like many of the national parks, backcountry camping is only allowed in specific areas and in Everglades National Park, very few backcountry camp sites are accessible on foot.  I settled on a overnight backpacking trip to Clubhouse Beach via the Coastal Prairie Trail.

The Coastal Prairie Trail starts at the Flamingo area of Everglades National Park and is 7.5 miles one way to Clubhouse Beach.  I knew my girlfriend and I were in for a real adventure when picking up our camping permit,  the park ranger exclaimed, “Oh, wow!  You’re hiking to Clubhouse Beach?  No one goes out there!”

Even in mid April, to say it was scorching on the hike would be an understatement.  Although the trail is flat, the trail was very muddy.  And, the mud was of a greasy and sticky consistency that  coated the bottom of your shoes and made hiking very difficult, especially since our packs were overloaded with fresh water for cooking and drinking.

On the hike out to Clubhouse Beach, we ran into an alligator hiding in a bush right next to the trail.  He saw us before we saw him and turned toward us and began hissing to let us know to steer clear…talk about intense!  We also saw a few snakes and literally thousands of little land crabs that would scurry back to their burrows when we would get within a few feet of them.  I can only describe the noise the swarm of little crabs made scurrying about through the brush as creepy.

Shortly after the turnoff to Clubhouse Beach, we found about 100 yards of knee deep water and swamp between us and the beach.  Knowing we had just recently had a close encounter with an alligator, hiding in a bush of all places, it took some serious courage on both my girlfriend’s and my part to wade through the swamp (prime gator habitat) to reach our final goal.

All that effort was absolutely worth it; the southern terminus of the everglades, where land meets the milky colored salt water of Florida Bay, is absolutely beautiful.  Even though it was the dry season, the bugs were far worse than anything I’ve experienced in the mountains.  Still, I managed to hike around and explore the beach and surrounding area and was treated to a spectacular sunset and sunrise.  I paid dearly for my explorations; by the time we left the everglades, I had more mosquito bites than one could feasibly count….easily over a hundred on one hand alone!

Florida Bay is very shallow.  At high tide, you could walk out hundreds of yards out into the bay and never get any deeper than your waist.  When the tide went out, vast amounts of interestingly textured mud flats were exposed.

After the sun set, a calm bluish dusk set in.  I like to think this photo reminds me of how calm and comfortable this place is, but in fact, I was being eaten alive by mosquitoes. 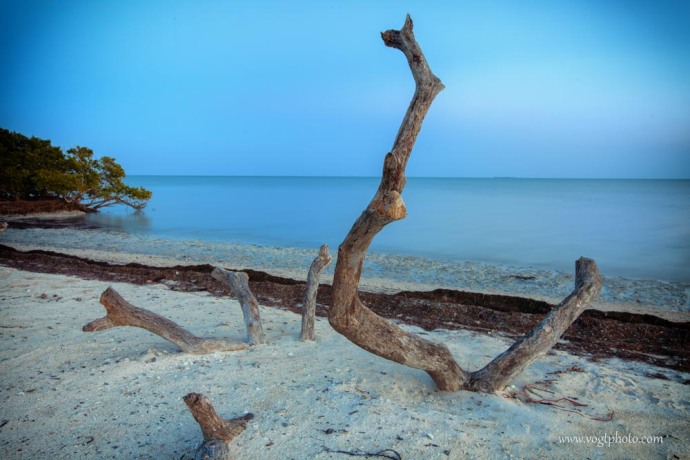 I took several photos of this interesting shaped remnant of a tree but noticed dark spots in my first few test shots.  The mosquito swarms were so intense, the bugs were even swarming my camera!  I had to take my baseball cap and waive it around my camera to scare off the bugs and then quickly take a picture before the swarm returned to attack me and my camera.

A patch of Batis, or saltwort, stands out in a large field of the same.  Saltwort is a very important salt tolerant plant that grows in the boundary regions between fresh water and salt water. 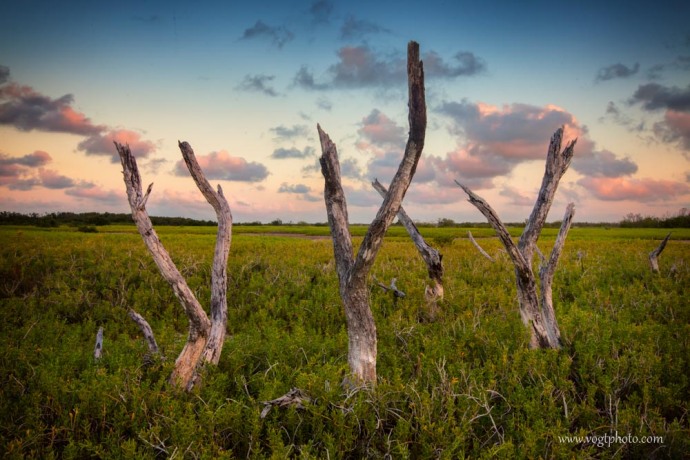 In the mid 2000’s Hurricanes Katrina and Wilma moved across the Everglades and caused significant damage to the coastal forests, killing many trees by stripping them to their trunks, which are left behind as a reminder to the power of these tropical storms.  I thought these trees looked like ghosts.

The Everglades are absolutely vast, but remains a very threatened place.  Since 1900, the amount of birds in the everglades has been reduced by 90%.  In fact, I was shocked at how few birds we saw over the weekend.  With this trip just being a simple in-and-out overnight trip, I was surprised how whipped I felt upon exiting the wilderness, but a sore body is a small price to pay to enjoy a piece of paradise…even if only for a brief time…