In late August last year, I spent a week with several friends visiting Yellowstone National Park in northwest Wyoming.  The highlight of that week long vacation was a four day, thirty mile backpacking loop hike into Yellowstone National Park’s backcountry.  Before we even arrived in Yellowstone, it had been raining…a lot.  On the first leg of the backpacking trip, which started on the south boundary trail (8K7) right at the south entrance, we had to cross the Snake River.  By mid August, the river at the South boundary is only supposed to be knee to thigh deep, but to my surprise, the incessant rain had turned the river into a waist deep raging torrent.  After some searching for “the best crossing” and some heated debate, my group linked arms and crossed the river as a team making it across without major incident.  Then, after hiking for several hours, we arrived at our first campsite (campsite 8C1) near the Snake River Hot Springs.

Around sunset, the storm broke up just a bit to create some interesting light and cloud formations while several extinct hot springs along the river banks made for some interesting and very unique views.  The next day, we continued on our hike and the rain continued to fall.  We had to ford the Snake River again (which was still deep and fast moving) and then continued up the Snake River Cutoff Trail to press on to our second campsite on the upper Snake River (campsite 8C4).  While hiking the cutoff trail, the trail faded in and out and I eventually lost the trail completely.  Thankfully, I’m quite comfortable hiking off trail with just a map and compass to navigate, but from the looks on my companion’s faces, especially the two from NYC, they were less comfortable with the situation!  We arrived at our camp later than expected, soaked to the bone, and cold.  We built a big fire to warm up and attempt to dry off, ate dinner, and then crawled into our damp sleeping bags for the night.

The next day, we continued on to Heart Lake.  While hiking, we saw two wolves including one feeding on a bull elk carcass!  What a rush!  Too bad my camera was stored safe and secure in my backpack.  By the time we arrived at our camp on the shores of Heart Lake (campsite 8H3) the rain had finally stopped and the sky was even flirting with clearing up.  I spent a couple hours exploring the shore near our campsite and ended up capturing several enjoyable images in the constantly changing weather conditions. 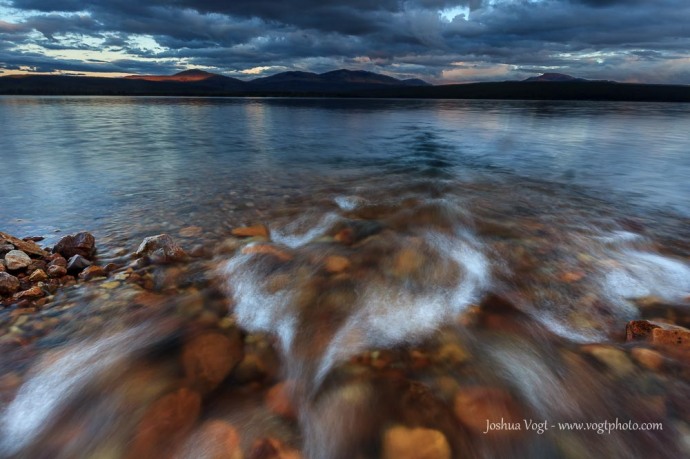 Our first campsite was great because of the proximity to hot springs, the second campsite was neat due to how remote it was, but the third campsite at Heart Lake was my favorite.  There is simply something special about camping on a lake shore miles away from anything that can be described as civilization.  How peaceful. 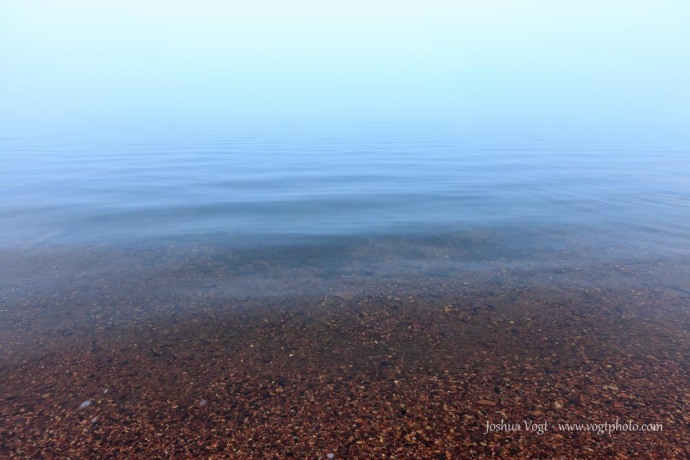 On the last morning of our backpacking trip, we woke up to incredibly dense fog blanketing the area.  The fog was so thick, you couldn’t see more than a few yards!  The conditions were quite eerie and I imagined the scene could have easily been described in a Stephen King novel.  I was just waiting for a zombie, or maybe more realistically, a grizzly bear to come lumbering out of the impenetrable fog to bring an early end to our backpacking trip!  Alas, we saw no zombies or grizzlies for that matter.  However, with the limited visibility, I was glad the final leg of the hike was on a well established, easy to follow trail! 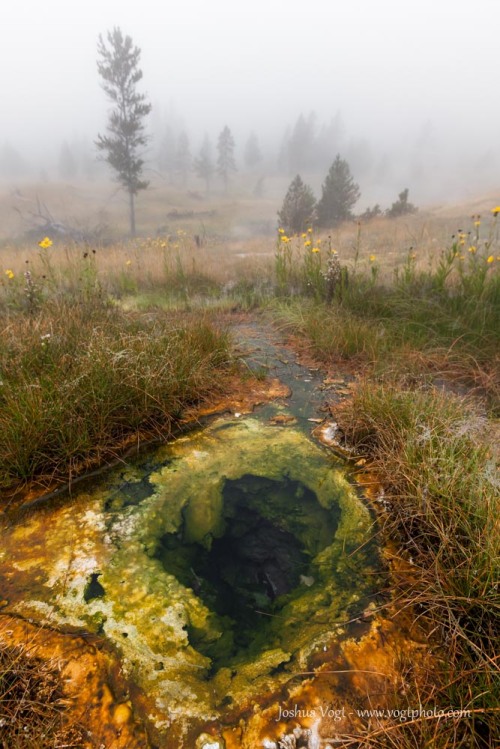 Once back on the trail, we passed several hot spring areas in the aptly named Witch Creek Drainage before reaching the Heart Lake Trailhead (8N1) before noon.  My companions settled down and rested while I stuck my thumb up in the air on the shoulder of the South Entrance Road.  It took probably twenty minutes or so, but a curious elderly gentleman picked me up and gave me a ride back to the South Entrance where we left my truck four days earlier.  I jumped in my truck, picked up my friends, and we raced to the Town of Jackson to stuff ourselves with good food and amazing beer at the Snake River Brewery.

Even though it was a soggy trip and I didn’t see a grizzly bear (yeah, I know it is weird that I WANTED to see Smokey), I had a fantastic time backpacking in Yellowstone!  I guess I will just have to come back for another trip!  So many miles of backpacking trails existing within Yellowstone you could spend a lifetime hiking here and enjoying both the unique landscapes as well as the abundant wildlife!